What Is Migraine? – Causes, Types, Symptoms, And More

A migraine is a recurrent, throbbing, severe headache that usually moves one side of the head, although it can affect both. The pain begins quickly and may be preceded or accompanied by visual, neurological, or gastrointestinal symptoms.

Although migraines can start at any age, they usually begin in people between 10 and 30. Sometimes it dissolves after 50 and is more common in women than in men. Seeing that more than 50 per cent of people with migraine have family members who also have it, one would assume that the tendency may be genetically transferred. In common, migraine pain is more severe than tension headaches. 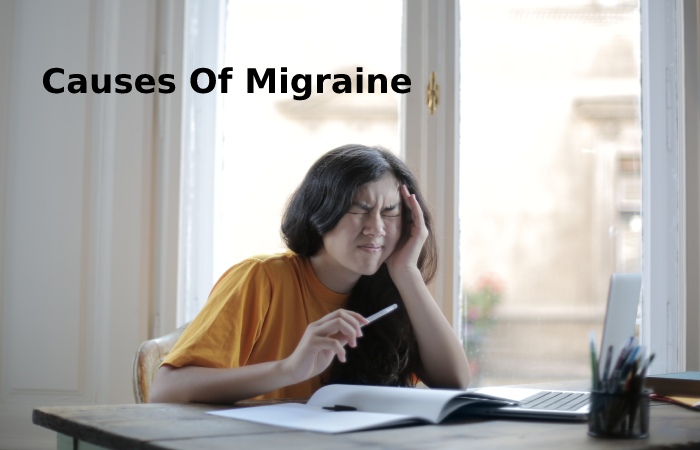 The exact reasons for migraines are unknown, although several theories have been studies. Migraine is now believe to be a genetically-based constitutional disorder. The triggering reasons are difficult to identify and different in each person, but the most frequent are:

Inheritance: although the form of heritage is not fully established, in some particular forms of migraine, the gene that transmits it, located on chromosome 9, has already been identified.

Age: in childhood, migraine occurs equally in boys and girls. From puberty and due to hormonal changes, the incidence of migraine in women skyrockets.

Stress and anxiety: it is necessary to learn to relax, to look for some distraction in stressful moments.

Hormones: the most frequent is to suffer one or two crises a month, fundamentally in the spring and autumn, and these can last from 4 to 72 hours. In addition to the intense headache, these ailments can accompany by other symptoms such as nausea, photophobia or vomiting. To a lesser extent, they can cause irritability, anorexia, vertigo and dizziness. Migraine tends to worsen with ovulation and menstruation, as well as with taking oral contraceptives. Pregnancy, however, usually temporarily improves migraine, and many women improve dramatically when their periods stop ( menopause ).

Ingestion of alcohol and diet:  some foods and drinks can favor a migraine attack to be triggered. For example, alcohol, especially red or burgundy wine; meals with monosodium glutamate (MSG); products containing tyramine (cheese); canned meats with nitrates; chocolate and artificial sweeteners.

Diet has an important relationship with the appearance of headaches and migraines. The type of food influences this aspect and the times the meals are produce. Thus, for example, fasting is one of the main reasons for migraine, so you should avoid prolonging the time without eating and maintain a regular meal schedule.

Lack of or excess sleep:  can also be a migraine trigger.

A migraine can recur chronically if the patient does not take adequate measures to counteract its effects. According to the Spanish Society of Neurology (SEN), about 3% of people with migraine go from having an episodic migraine to a chronic one each year, while 6% go from a low-frequency migraine to a high-frequency one. Some of the causes that can cause this carbonification are the following:

There is no helpful laboratory test for the diagnosis of migraine, although, due to its specific pattern of pain, it is often easy to identify. About 20 per cent of people experience symptoms of depression, irritability, restlessness, nausea, or lack of appetite, which appear 10 to 30 minutes before the onset of the headache (a period called the aura or prodrome).

The Periods Of A Migraine Attack Can Be Classified As Follows:

Specific symptoms can be detected that could be related to a malfunction of the hypothalamus , a region of the brain that controls the body’s internal balance. These signs are tiredness, difficulty concentrating, increased appetite, yawning, and excessive fluid retention. These symptoms appear in 60 per cent of patients. They perform between two hours and two days before the pain begins.

Not all migraines have an aura. They are transient neurological symptoms, which are established progressively and cause alterations in vision in most cases and, to a lesser extent, sensitivity or language. The aura only occurs in 15 to 20% of migraine patients and lasts between 10 and 30 minutes. It is due to a propagated cortical depression: the brain’s occipital lobe launches a wave that is emitted from the back to the front, causing a dysfunction in the brain structures.

The Most Common Types of Aura are:

Visual aura is the most common, appearing in 90% of migraines with atmosphere. Its form tends to be that of a flash in the center of the field of vision that spreads in the form of zigzag lines that move to one side. There are also different types of vision disturbance:

Sensitive aura:  appears in 60% of cases. It consists of a tingling sensation that occurs in the fingers of the hand and spreads to the shoulders and, sometimes, to the mouth and tongue.

Aura of language:  it is rare. The person who suffers from this aura has problems articulating words or understanding others.

Retinal aura:  it is infrequent. Its signs are the same as those of the visual aura, but it affects only one eye.

Aura of the brainstem:  it is scarce. Symptoms appear in the brainstem and are familiar to visual, sensory, and speech auras.

Motor aura:  very rare. It produces a temporary paralysis of part or all of the body, although it usually does not last more than a day.

The kind of pain and its affected area varies in each patient. It commonly presents as mild headache anxiety that rises in intensity. It lasts between four and 72 hours, while only a sixth of patients suffer from it for more than 48 hours.

The pain began by migraine is disappearing, although 80 per cent of those affected say they feel inadequate after the episode of intense pain. Its duration is variable: from a few hours to several days.

Since the exact causes of a migraine are not clear, it is difficult to determine how to prevent it. However, you can follow some recommendations related to some of the frequent symptoms of patients suffering from migraine so that the chances of it appearing are lower:

Diet: Some patients associate the intake of certain foods with a migraine episode. Therefore, it is vital to know what the trigger food is and avoid only the one that triggers it. Among the foods that act as a possible trigger are alcohol, Chinese food, smoked foods, chocolate, nuts, citrus fruits or caffeine. Fasting is also associated with the onset of migraines, so it is vital to eat several times throughout the day at regular times.

Hormone level: especially indicated for women who suffer from migraine during menstrual cycles. Estrogen variations that can be cause by, for example, contraceptives can worsen migraine episodes.

Most of Patients Suffer From the  Frequent Types of Migraine, Which are:

Tension headache: it is mild or moderate pain. It can be cause by stress, poor posture, fatigue or depression.

Cluster headache: It is more common in women. It is a pain on one side of the head that extends to the eye. It can last about 15 minutes and often occurs at night.

Migraines or migraines: constitutes a set of symptoms, among which are, in addition to headache, vomiting, nausea, sensitivity to light and noise. Migraines are disorders that have a genetic basis. It has a pulsatile character and is accompanied by generalized malaise. The pain is usually localize in one part of the head or all of it. This pain usually worsens with physical activity and improves with rest. It affects 17 out of 100 women and 5% of men.

Migraines with aura:  Migraine with aura affects between 15% to 30% of people who suffer from this pathology and is distinguished from other types of migraine by the appearance of symptoms that can affect sight or touch and even the ability to speak.

Also Read: What Is Coconut Oil For In Hair? – Benefits, Uses, And More

What Is Coconut Oil For In Hair? – Benefits, Uses, And More

About Headache In The Neck And Its Causes

What Is Homeopathy? – it Works, and Side Effects

Everything You Need To Know About Diabetes