How Many Calories Does An Apple Have? – and Its Benefits

Red, yellow, green, or bicolor are many apple varieties, and all are tasty and healthy. If you have followed a diet at some point in your life, it likely included consuming light fruits such as apples. 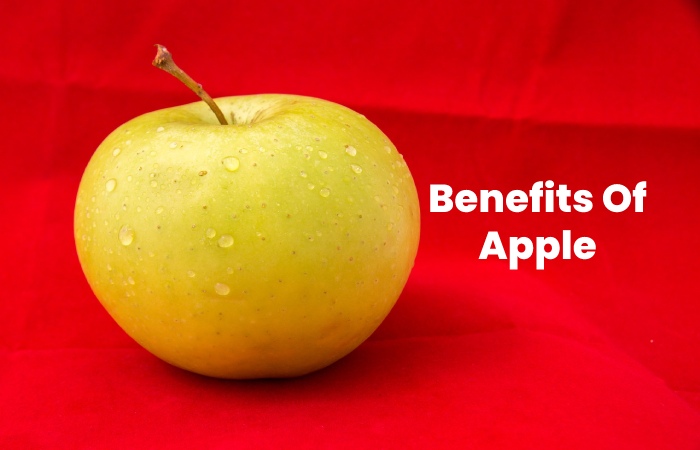 A famous popular saying says, “an apple a day from the doctor would free you” have you ever heard it is an almost literal translation of the Anglo-Saxon “an apple a day keeps the doctor away”. Although it sounds a bit exaggerated, it remains not without reason since the benefits of apples are diverse and very interesting.

Apples are healthy fruit and have beneficial properties that help eliminate toxins.

In addition, they provide valuable nutrients such as vitamins, mineral salts and soluble fiber. Especially this last component makes the consumption of apples indicated to lose weight.

The Vegetable Fiber Of The Apple Has The Multiple Function Of:

But the benefits of eating apples are not limited to their low caloric intake. To take advantage of this fruit’s satiating and detoxifying power, it is advisable to take it with the skin whenever possible. To do this, you have to wash the skin well, rubbing with a brush if necessary, to remove any traces of wax it may have. Remember that it is not recommended to use soaps since they could impregnate the fruit.

To calm nervous hunger or before going out to dinner, it may be a good idea to eat an apple. It will help relax your nerves, feel more satiated, and reduce the consumption of other caloric foods throughout the day.

The properties of the apple should have been enough to convince you to incorporate it into your diet. But if this has not been the case, continue reading all the benefits of the apple that we tell you below.

Here is the big question we repeat to ourselves with all the foods we consume regularly. And it’s funny because with those who gain weight. The great variety of apples on the market makes it impossible to give a specific answer to how much fat an apple is. Why? Because of its size, which is different in each of them. What can be said is that, on average, the calories in an apple are 50 per 100 g.

As we said, not all apples provide the same amount of calories. Do you want to tell how many calories an apple has according to its variety? We have the answer! This way, you will know almost for sure how many calories you eat when you eat one.

How Many Calories Does An Apple Have? Main Varieties

Its weight significantly determines the calories in an apple. Hence, they vary depending on the type you eat. Did you know that there are more than 7500 varieties It is estimated that trying them all would take you more than 20 years, an awful lot of time. Don’t worry, we are not going to be so exhaustive in analyzing the calories in an apple because this article would take forever, but we are going to summaries the most consumed in Spain.

It is the most common variety and the most appreciated yellow one. Its colour is golden yellow. However, it has a reddish side if it comes from mountainous areas. These apples are medium-large and can have between 70 and 150 calories per piece.

You can eat them raw as they are delicious, but they delight when cooked in the oven with cloves and cinnamon. Are you going to dare to prepare them? You will only need:

To start, preheat the oven to 170º. Wash the apples well and remove the core, careful not to break them at the base. You have to leave a hole to put the filling. Chop the nuts and raisins and put them inside the apple. It is time to include the cinnamon, the clove and the splash of sweet wine. Cut the skin, so it doesn’t burst, and put the apples in a baking dish with a bit of water. Bake for 45 or 50 minutes, depending on how you like it.

The red it is dark red and is easily recognized by the four bumps on the bottom. Its crunchy texture and slightly mild flavor make it one of the favorite varieties of salads. In addition, with its crunchy and juicy consistency, it is ideal for eating raw, alone or mixed with other fruits. Also suitable for snacks! The delicious red apple has between 50 and 75 calories depending on its size.

The perfume and the intense green colour characterize this variety of apples. It is usually medium in size (about 100-150 g), providing between 50 and 75 calories.

It is ideal for eating raw as an ingredient in the preparation of detox shakes or salads.

It is one of the most appreciated by the French. It has a yellow color with small brown spots, and its pulp is white and dense.

Its flavour is sweet and sour, and, in general, it has a small-medium size. However, it lasts longer than other fruits and can be consumed both raw and in sweet and salty preparations once harvested. The calories in a pippin apple are 108.

It is a bicolour variety (red and yellow) created in Japan. It is characterized by small-medium size and a sweeter flavor than other varieties.

Like the pippin, it stays fresh for a long time after harvest (up to 6 months refrigerated) and is best served raw. The calories of the fuji apple are 71.

The most straightforward baked apple recipe is made in the oven and only includes one more ingredient: sugar. As you can imagine, that brings the baked apple calories up to 360 per 100g.

The same thing happens with the cooked apple; to prepare it, sugar is added to create a kind of syrup. So the calories of the apple cooked in this way are also 360 per 100 g.

What Apple To Include In The Diet?

According to some research, the most indicated apples in diets for weight loss would be green. It is because the results of specific studies suggest that this variety is the most digestible. But, as we have told you before, all apple varieties are low in calories, so go ahead and eat the one you like the most, or try them all!

Now, do not cheat. Avoid roasted or cooked apples, as well as compote or cake. The only thing these preparations do is add calories to the apple, and they are not going to bring you more benefits.

Like mid-morning or mid-afternoon, Raw apples are an excellent place to start, but why not give that idea a spin. You can also look for simple preparations in which to include them. For example, here are three recipes with the apple to suck your fingers.

The first recipe with apple that we propose is a very healthy appetizer with a great flavor that will surprise all your guests. In addition, it is elementary to prepare! You will only need two apples and cinnamon powder.

To make it, cut the apples into slices. When doing so, keep in mind that the thinner they are, the crunchier they will be. Then sprinkling the pieces with cinnamon and bake at 200 degrees for about 50 minutes. The time will depend on the fatness of the apples, so keep an eye on the oven and, when the crispness is to your liking, take them out. Let them cool for a few minutes before serving.

The second recipe with apple that we bring you is a simple and delicious first course. To prepare this apple, spinach and mozzarella salad for four people, you will need:

Start by washing the apples well since you won’t be peeling them and serve them with the skin on. Next, cut them in half and cut them into thin slices. If you’re not going to eat the salad right away, rub the apple slices with lemon juice so it won’t oxidize. Then, clean the currants, spinach and escarole and dry them well. If they aren’t already, chop the walnuts. Finally, drain the mozzarella of its liquid and cut it into small portions.

A good plating option is to prepare a bed with spinach and escarole. Then, you can distribute the rest of the ingredients to your liking. The last touch will be to season the mixture with olive oil, apple cider vinegar, and salt.

Green Smoothie With Pineapple And Apple

The last  recipe idea we bring you is a great option to hydrate yourself well, especially in hot weather. In addition, it will also help you cleanse your body of toxins because it is very diuretic and has a detox effect. To prepare it, you will need:

Peel the apple and pineapple and cut them into not very large pieces. Mix them with the spinach and pass them through the blender to obtain the juice. Once you have a thick puree, pass it through the Chino to separate the juice from the pulp. Next, squeeze the lemon and add its juice to the smoothie. Finally, you can add a little honey if you want to give it a sweeter point. Beat the mixture until it has completely dissolved, decorate to taste, and you will have your smoothie ready to serve.

In addition to the apple, many low-calorie products and foods will help you achieve your goals of losing weight or maintaining it. Incorporating other low-calorie fruits, such as kiwi, will help you have a varied diet. You can also count on other foods that are low in calories. What do you think of the melon. It is delicious and very refreshing

Also Read: What Is Depression? – Causes, Types, And More

What Is Depression? – Causes, Types, And More

Some Home Remedies For Dry Cough

All About Pulse and Heart Rate

What Is Homeopathy? – it Works, and Side Effects